Timeless and iconic are two words that come to mind when we hear Harry Bertoia. Read our blog where we celebrate his mid-century modern designs now. 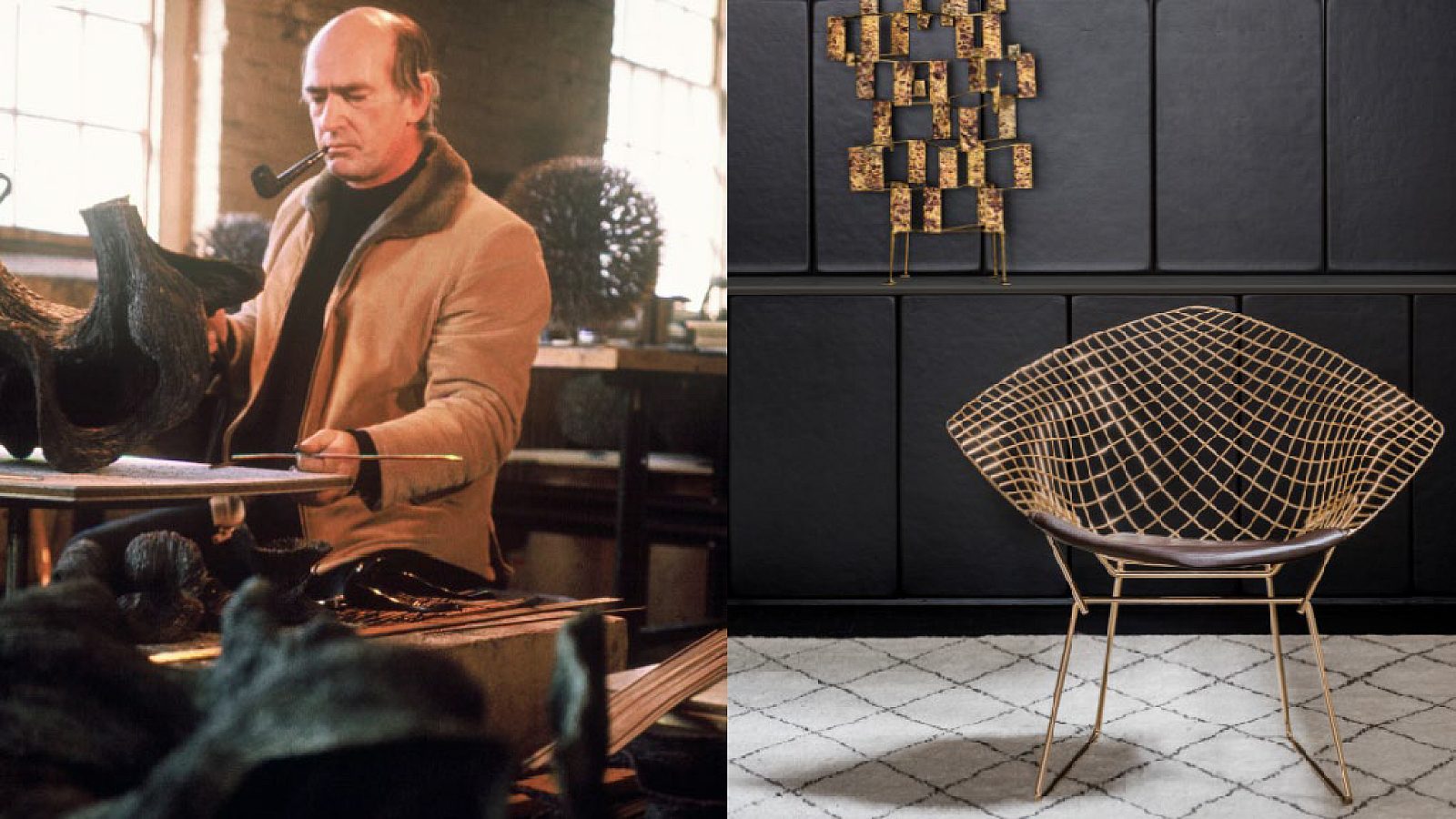 This Spring, North Texans enjoy a rare opportunity to interact with the work of Harry Bertoia, one of the most significant American designers of the last 100 years. Dallas’ Nasher Sculpture Center is hosting Harry Bertoia: Sculpting Mid-Century Modern Life, the first major retrospective of its kind to be mounted in almost 50 years, through April 24th.

Although many GL Seaman & Company customers may associate Bertoia with the iconic wireframe chairs still sold by Knoll 70 years after their debut, he was also responsible for innovations in sculpture, jewelry-making, printing, and music.

Keep reading to learn more about Bertoia, his contributions to Knoll, his many other accomplishments, and the profound influence his work continues to exert.

Beginnings: From Italy To Michigan

Harry Bertoia was born Arri Bertoia in 1915 in the Italian village of San Lorenzo. In a 1972 interview for the Smithsonian Archives of American Art, he describes his birthplace as a small town “situated somewhere between the Alps and Venice.”

As a young man, Bertoia earned a local reputation for being a skilled draftsman. Brides would even seek him out to design embroidery patterns for their wedding linens. Eventually, he began formal studies with an art teacher from a neighboring town. It quickly became apparent that Bertoia’s talent merited instruction more advanced than this instructor could offer. Two options presented themselves: attend art school in Venice or move to Michigan, where his brother Oreste had established himself as a laborer for Ford Motor Company. The former was an expense beyond the means of Bertoia’s family, so, at the tender age of 15, he boarded a ship to America.

After a few months in an “Americanization” program where he learned to speak English and other aspects of life in the United States, Bertoia entered a program for talented art and science students at Detroit’s Cass Technical High School. In 1936, he won a scholarship that allowed him to study drawing and painting at the Detroit Society of Arts and Crafts. He began his six-year residency at the Cranbrook Academy of Art one year later.

Inspired by Germany’s Bauhaus, Cranbrook took a unique, somewhat radical approach to art education. Students were not required to follow a prescribed curriculum. Classes were open and students could attend them as they saw fit. They were also given the studio space and resources needed to explore their interests. The Cranbrook approach thus allowed these budding artists to experiment with a wide array of materials and methods, all while forming relationships with other artists working in different disciplines.

Bertoia took full advantage of these opportunities. At Cranbrook, he met a group of makers and thinkers whose friendship would sustain him throughout his career: Charles and Ray Eames, Eero Saarinen, and Florence Schust Knoll Bassett.

Bertoia entered Cranbrook with the goal of becoming a painter. However, according to his daughter and biographer Celia Bertoia, “he soon realized that painting was two-dimensional. It was just too flat, and it wasn’t enough.” In his off-hours — and partly inspired by his older brother’s experience on the Ford auto assembly line — he began spending more time in Cranbrook’s metalworking shop.

By 1939, at the behest of Cranbrook’s administration, Bertoia was running the facility. Although the war effort limited his access to raw materials, he created some of his most famous jewelry pieces (some of them fashioned from silverware he picked up at local flea markets) during his final years at Cranbrook. He also produced over 100 monotypes, elaborating a geometric-organic visual vocabulary that he would later employ in his three-dimensional work.

At the conclusion of his Cranbrook tenure, Bertoia relocated to California. From 1943 to 1946, he worked with his former classmates on the mass production of the molded plywood chairs that would become synonymous with the name “Eames.” After the war, he joined the Point Loma Naval Electrical Lab.

As groundbreaking as the Eames chairs were, Bertoia’s association with the Lab proved to be just as significant to his artistic development. Specifically, it provided him training in the emerging field of ergonomics (then called “body dynamics”). As he remarked later regarding the chairs he designed for Knoll, “the human measure is still the strongest factor… there are certain motions we go through — we like to lean back, like to toss things — and if the chair’s adaptable, it responds... it’s almost like wearing a comfortable coat; you really don’t know you have it on.” At this same time, Bertoia began working on his first large-scale metal sculptures.

In 1950, Florence and Hans Knoll famously issued an open invitation to Bertoia: if he would only commit to sharing “something interesting” with them, he would receive studio space in their Pennsylvania factory, full creative freedom, and public credit for his designs.

Bertoia devised something more than “interesting.” Using his extensive knowledge of metals, he set out to design a chair that, while as light as possible, was also functional and a pleasure to sit in. In essence, he was responding to a question that architect Walter Gropius had casually posed to him almost a decade before: “What can you do with objects in space?” As Bertoia recounted in 1972, “I didn’t have an answer, and I probably am still working on it.”

Introduced in 1952, the chairs he created — now known collectively as The Bertoia Collection — have been in continuous production since. Bertoia preferred not to title his pieces, noting that “it is my practice not to label any work, any sculptures. I rather do the object and let it go for what it is, let it stand on its own.” Over time, however, the individual pieces in The Bertoia Collection have earned the nicknames by which designers, mid-mod enthusiasts, and Knoll customers know them: the Diamond Chair, the Bird Chair, the Asymmetric Lounge, and so on. All three are on display at the Nasher, with the Asymmetric Lounge (not produced by Knoll until 2005) present in the form of Bertoia’s original prototype.

Bertoia’s chairs were immediately recognized for their aesthetic qualities. “If you look at these chairs, they are mainly made of air, like sculpture,” the artist himself explained. “Space passes right through them.” But the fact that they are (in Bertoia’s words) “studies in space, form, and metal”) only partly accounts for their enduring popularity.

“Bertoia designed furniture pieces that are versatile and applicable to multiple market sectors in interior design,” says Karin Taylor, Principal / Director of Interior Design of Quorum Architects. “The appealing sleek silhouettes provide balance and a harmonic elegance to any space. Originality, style, comfort, color, and texture that are implemented in his designs are features that continue to be desired today.”

Adds Art Bloodworth, Workplace Design Leader and Principal at DLR Group, “Harry Bertoia was one of the rare and wonderful individuals who mastered both functional and fine arts. He created objects of space and light that draw you in and pull you closer. I have always thought his work shows a profound understanding of the beauty of pattern and form — of both the human and the abstract. The enduring appeal of his iconic furniture designs is evidence of their sculptural souls.”

Given how impactful it was, Bertoia’s collaboration with Knoll lasted only two brief years. But he continued to serve as a consultant even as his new-found fame earned him a number of important private and public commissions. The latter included pieces for leading brands such as General Motors, IBM, and Hilton (the hotelier) as well as the 3,000-pound, brass, copper and nickel multi-plane screen that spans the entrance to the main branch of the Dallas Public Library.

Nasher Curator Marin R. Sullivan describes Bertoia’s imagination as “restless,” and the arc of his post-Knoll career supports that observation. From his home studio in rural Pennsylvania (purchased with the proceeds of his work for Knoll), he continued experimenting with welded and cast forms, often drawing inspiration from natural forms such as trees, shrubs, and flowers. He even produced a collection of sounding sculptures: elegant arrays of metal rods that, when set in motion, creating an aural environment whose at-times haunting tones Bertoia termed “sonambient.”

Sadly, Harry Bertoia died in 1978. He was 63 years old. Although lung cancer cut his career short, it did not prevent him from being prolific. By some counts, he produced over 10,000 unique works in a little under 40 years of concentrated artistic activity.

The scale and scope of Bertoia’s impressive output makes even more sense when one considers the beliefs that sustained his practice. “It is my meaning that art should belong to everyday life,” he said. “It should be incorporated in the society where it can be seen by everyone, where it can encourage a more open attitude towards art.” Or, as he famously asserted on another occasion, “The urge for good design is the same as the urge to go on living.”

Please don’t miss this incredible opportunity to learn what our designers — and customers — have known since we established our premier partnership with Knoll more than 35 years ago. Harry Bertoia had a hand in shaping some of the most livable aspects of the world we inhabit today.

You can plan your visit to the Nasher Sculpture Center at https://www.nashersculpturecenter.org/visit/plan-a-visit.

Curious about the MillerKnoll Collective?

Check It Out Now